Newt's Voyage, created by WCER's Gear Learning, is available for free public play by iPhone and Android app or on Steam.

Jake Ruesch has a secret weapon to ensure the educational video games he helps design for UW−Madison’s Gear Learning are playable not just by ‘gamers,’ but by those with little or no experience playing video games.

He recruits his mother into the testing process, and for Gear Learning’s latest project, a space travel game known as Newt’s Voyage that aims to teach basic physics, he didn’t stop there. Ruesch also put his mother-in-law and his grandmother in front of his computer at different times and watched as the three of them maneuvered virtual spaceships around the moons of distant planets, trying to master the game.

Eventually, all three players completed all the game’s progressive levels. While none of the players identify as gamers, they had a blast playing the game and learned a little about physics in the process.

“More than once, my mom said, ‘Oh, I have to stop,’” says Ruesch, who is Gear Learning’s art director. “And she’d get up and she’d walk away, and five seconds later, she’d be right back there, playing it again. That’s the exact type of game I wanted to build – it’s easy to pick up, but hard to master, and it hooks people.”

As part of the Wisconsin Center for Education (WCER) within UW-Madison’s highly ranked School of Education, Gear Learning’s mission is to engage players with complex concepts in fun ways that lead to active learning. The 15-member team of programmers and artists that make up Gear Learning work in a basement space transformed into a dynamic educational game development studio, with lime green walls, sci-fi memorabilia and high-tech animation tools.

The studio’s growing portfolio now includes a dozen games created as research tools, in-class activities or even games that can be assigned and tracked as homework. Gear Learning’s games are not only diverse in application, but also cover a wide range of complex subject matter including medication safety, regenerative medicine, implicit bias, the neural mechanisms of emotion and environmental science.

Newt’s Voyage, with its focus on physics and astronomy, is the studio’s first game to be made available for free on the “big three” digital publishing platforms: the Apple Store and Google Play, where it runs on an app optimized for mobile devices, and the popular online gaming platform Steam.

“We focused very heavily on making a fun game, something enjoyable to play, that gamers and non-gamers are going to like,” Vaughan says. “So while this is classified as an educational game – and it does teach you these concepts – it’s not boring.”

Newt’s Voyage so far has tallied more than 2,000 plays or download sessions across all three commercial platforms. And while the administrative work involved in setting up the app-publish process at UW−Madison was extensive, it will pay dividends down the road.

“We wanted to get the publication process in place,” Gear Learning Director Mike Beall says. “While this game is free, should we build a game in the future that has commercial potential, we want to have the proper mechanisms in place to allow that.”

As players engage in the thrills and frequent spills of their space travels – collecting a required number of chemical elements to advance a level, dodging aliens, and gently landing their ship on a moon landing pad to refuel before blasting off again – they experience often difficult-to-understand concepts about motion and gravity.

“The importance of this game is its accurate fidelity to Newton’s Laws of motion,” says WCER Director Bob Mathieu, who put Newt’s Voyage on the path to creation some two years ago, when he asked Gear Learning to make a game like it as a teaching aid for astronomy. It’s based loosely on the popular 1979 video-arcade game Lunar Lander, with lots of modern tweaks.

“One can teach Newton’s Laws with words, equations and problems, but there is nothing quite like having to pilot a spacecraft in the friction-free environment of space,” says Mathieu, the Albert E. Whitford Professor of Astronomy. “Friction-free, of course, until you hit the moon!” 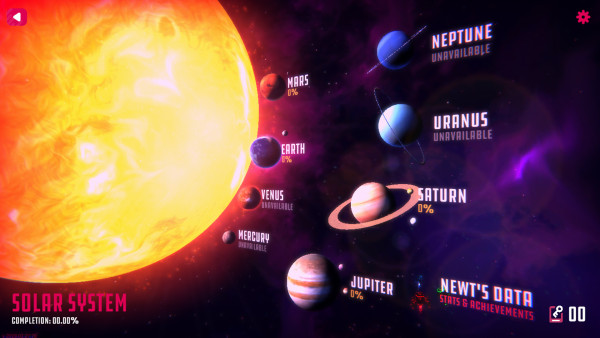 Players can learn the names of moons around planets in the solar system and other astronomy facts through game pop-up signs.

In addition to action-packed gameplay itself, the players also are able to gain knowledge through the game's user interface. When the cursor is placed over a represented moon in the game, a pop-up appears presenting related astronomical facts, such as the moon’s name, composition and surface temperature.

While players may not be aware they are learning, research shows that exposure to new information while actively engaged in gameplay can boost knowledge retention.

“Let’s imagine a middle school student plays the game,” Beall says, “and later in a high school science class they hear the name Io, which is Jupiter’s closest moon, the fourth largest and most dense moon in the solar system. Evidence-based research shows that the student can draw on that gameplay experience from middle school and remember interacting with the in-game virtual moon, in context. A student who did not play the game would not be able to draw on that experience.”

To create accurate and impactful learning opportunities, Gear Learning works closely with UW−Madison faculty and staff, external subject matter experts and other stakeholders through an iterative approach to map gameplay mechanics to a variety of learning objectives. For Newt’s Voyage, that subject matter expertise came primarily from UW−Madison’s astronomy department.

“In addition to piloting the spacecraft, we also gave players the opportunity to collect elements from the moons they visit,” Beall notes. “Seeing that elements (from the periodic table) exist on Earth and in other areas of our planetary system can be a learning moment in itself.” 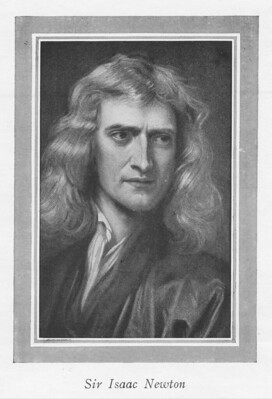 Newton is credited with developing the three laws of motion that form the principles of classical physics -- before relativity and quantum mechanics advanced the field -- and that remain a model for physics in everyday life.

Summoning your ninth-grade general science, think ‘an object in motion remains in motion’ and ‘for every action, there is an equal and opposite reaction’ and 'force equals mass times acceleration (or F = ma).'

Playing Newt's Voyage -- either independently or in conjunction with classroom instruction --can help many learners feel those laws come to life through the game’s controls.

Game designers created a series of fictional spacecraft that players can choose to fly, each progressively more difficult to control, while gravity conditions naturally vary on on each moon. 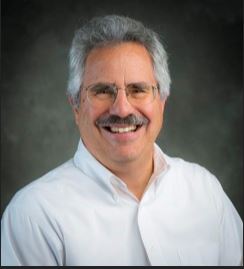 Players can control the level of difficulty they’ll experience through the ships they choose and the elements they try to capture. Bigger elements carry more points, but are located in harder-to-reach spots.

Complicating matters, the ships start with a finite amount of fuel, requiring regular visits to landing pad locations on moons where they can refuel but also might blow up if they come in too fast or land unevenly or hit any space debris they shouldn’t.

“It’s a risk-vs-reward proposition, to challenge yourself to be able to get that bigger reward and make it back without running out of fuel,” Ruesch says, who learned to complete every level of the game with every ship to ensure it was possible to do. “We thought out various ways a user can have some elements of control over their own destiny, in the sense that they can make the game as easy or as difficult as they want it to be.”

A lack of gravity is most noticeable around the Mars’ moon Phobos, designed as the last moon for players to unlock because “it’s extremely difficult,” Vaughan says. “There’s almost no gravity on that moon, so there’s nothing that pulls you back down to help you land.”

Newt’s Voyage has been available for public play since March, but that doesn’t mean development of the game is finished. Gear Learning collects gameplay data on every play of the game – without personal identification, but documenting how each person failed or succeeded at different game operations – with the goal of smoothing out any rough edges.

For Gear Learning, one core tenant of game-based learning is that the gameplay itself should never be a barrier to learning. “We’re always working to better understand where players who aren’t avid game players are struggling,” Beall says.