A new interactive visualization tool created by University of Wisconsin–Madison data scientists helps fans make sense of the motivations of more than 50 main characters in HBO’s hit fantasy series, “Game of Thrones,” based on the books by George R.R. Martin. It is available free for public use at: https://got.epistemicnetwork.org/

Fans have provided countless commentaries about the show, now in its final season with only two episodes to go, on websites and through social media exchanges over the past eight years. Most of their analyses, including those by other academics and data scientists, focus on the large cast of complex and at times unpredictable characters.

But a newly released tool created by the Epistemic Analytics Lab at the Wisconsin Center for Education Research, within the university's School of Education, goes far beyond analyses based solely on character interactions or specific events, such as the many deaths.

“Instead, we created a richer data set by using the transcripts of episodes from the first seven seasons, which is almost half a million words of dialogue and scene descriptions,” says researcher Zachari Swiecki, who led the team that built the tool. “Our analysis lets fans explore how each character contributes to the themes of the storyline, and to compare and contrast characters based on the network of their interests and actions.”

“ENA is a method for understanding how people think about problems by measuring how they connect ideas and actions,” says David Williamson Shaffer, Vilas Distinguished Achievement Professor of Learning Science and director of the Epistemic Analytics Lab. “Here we are using the same analysis method to understand the similarities and differences of the lords and inhabitants of Westeros.” 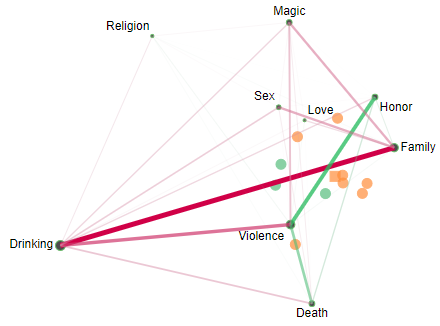 As in this comparison of Jamie (green) and Tyrion (red) Lannister, the ENA tool allows anyone to analyze the thematic networks of 51 characters on the HBO tv series “Game of Thrones.”

For example, Daenerys Targaryen and Cersei Lannister both are immersed in violence. But in Cersei’s case, violence is visited upon her children, and she exacts retribution for it. This can be seen in her strong thematic network connection between family and violence. For Dany, violence is done by her children—the dragons—at her command, demonstrating the powerful link between magic and violence in her thematic network. Or, if comparing Tyrion Lannister and Jorah Mormont as candidates for the job of Hand of the Queen, Lord Tyrion’s network shows the broader portfolio of experiences that he brings to the job—but that he is much more likely to be drunk than Ser Jorah!

Unlike the series, however, the “Themes of Thrones” network modeling tool will continue past this season. “We plan to update the tool to cover more themes,” says Cody Marquart, director of technology for the lab. “And we are building new features to let fans explore and compare thematic networks by episode, season or region.”

But the team’s purpose in creating and expanding the tool goes beyond interest in the Seven Kingdoms. “As much as we are fans of the show and enjoyed working on this project, our primary goal is to help people see the power of ENA and the other tools we’ve developed that allow researchers to work with large sets of both qualitative and quantitative data,” says Andrew Ruis, the lab’s associate director.

“To prepare for the network analysis of Game of Thrones,” Ruis explains, “we first automated the identification of nine different themes in the show’s scripts with a tool that uses active machine learning to automatically label data, and then checks that the automatic process matches human coding.”

From there, the team analyzed the labeled script data using ENA.

“Epistemic Network Analysis is a powerful technique for modeling and visualizing complex patterns of relationships,” says Swiecki. “Researchers have used it to study a wide range of problems, from how students collaborate to solve engineering problems to how surgeons implement complex operating procedures. It’s even been used to model brain activity recorded in functional magnetic resonance imaging data.”

And now, building on that work, ENA is revealing how the characters and houses depicted in Game of Thrones contribute to the thematic complexities of the show.

“Our hope,” says Shaffer, “is that ‘Themes of Thrones’ will make it easy for fans to use sophisticated research tools to explore how personal conflicts and ever-changing circumstances shape the shifting allegiances in Game of Thrones. And we hope that it will also help researchers see how they can use the power of ENA to solve very real problems facing our world today.”

The Epistemic Analytics Lab, located in the Wisconsin Center for Education Research within the University of Wisconsin–Madison’s School of Education, creates novel approaches and statistical tools to improve assessment of complex and collaborative thinking. The lab’s analytic tools are used by researchers across the U.S., as well as in Canada, Mexico, Chile, Great Britain, Sweden, Norway, Denmark, France, Switzerland, Germany, Turkey, Israel, Namibia, China, South Korea, Japan and Australia.

The Wisconsin Center for Education Research (WCER) is one of the first and most productive education research centers in the world. It has helped scholars and practitioners develop, submit, conduct and share grant-funded education research for more than 50 years. Its mission is to improve educational outcomes for diverse student populations, impact education practice and policy positively and foster collaborations among academic disciplines and practitioners.